The 2014 TESOL International Convention ended a month and a day ago. I didn’t go, but the organization conveniently live-streams the presentations of the keynote speakers. This year Dr. Surin Pitsuwan, of Thai political notoriety, gave the opening keynote address. His topic was of particular interest to me because it dealt with English in East Asia, where I teach now. Having himself been an English language learner, Dr. Pitsuwan provided some very unique insight into the use of English in this region.

He began by talking about the Association of South East Asian Nations (ASEAN), the economic organization made up of 10 countries. Among these 10 countries, nearly 1000 languages are spoken or have official status but they use English as their lingua franca. ASEAN was established in 1967 and has since become one of the most significant centers of consumerism and development. In 2012 they had a higher percent of world GDP than both the US and the EU. Of all the economic organizations, ASEAN seems to have the highest potential for growth. Could they have achieved this level of success without a common language with which to communicate? 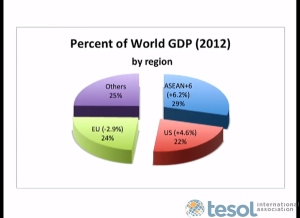 Southeast Asia is a region brimming with natural resources and tourist hot spots. It’s located right between economic powerhouses China, Japan, and Australia; the proximity to, making business much less expensive. You could say that all the dominos were in place for the ASEAN countries to vault themselves into economic success. Yet this couldn’t have happened without effective communication and the ability to collaborate between the nations. English has provided that last missing domino that made the whole cascade work.

During the Q&A after his address, someone asked Dr. Pitsuwan a poignant question. They asked if he thought of English as a “colonizing language”, having a negative impact around the world. In other words, are inner circle countries such as The United Kingdom and America using English to dominate those who weren’t “privileged” to learn English as their native tongue? Are we imposing our culture and identity on East Asia by teaching them English? 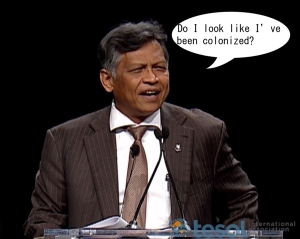 I couldn’t agree more with Dr. Pitsuwan’s response to this question: it depends on your attitude. If you think of English as an oppressive entity, forced upon you by those with economic power, then that’s what it will be. But as Dr. Pitsuwan said, “I prefer to see things positively”. English is an instrument of construction. In using English, the ASEAN countries have made themselves an economic powerhouse that can compete with the likes of the United States. In using English, have they sold their culture for economic reform? No, they have made English their own, and used it to better their station.

What people need to understand, and what the asker of that question didn’t know, is that there is no big-brother-esque English out there ready to put its boot into the face of those without power. There are only Englishes, like American English and Asian English, available to be used and developed by anyone with the will to do so. Dr. Pitsuwan quoted one of the other keynote speakers in his address, Professor David Graddol: “These peoples out there who learn English from the native speakers may become more influential to the world than the inner circle native speakers themselves, “so watch out”, said Dr. Pitsuwan, “we may become your Frankenstein.”